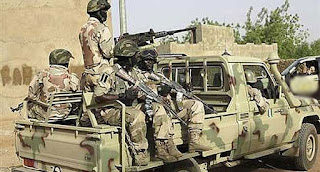 He said while a large number of women and children were rescued unhurt between November 1 to 24, a terrorist who specialised in the manufacturing of Improvised Explosive Device (IED) was captured alive.

“Most importantly, a number of women and children hitherto held captive were rescued unhurt. In this regard, a total of 22 Boko Haram/Islamic State of West African Province (ISWAP) terrorists were neutralised while one terrorist Improvised Explosive Device (IED) expert was captured alive during one of our encounters with them,” he said.

“As a result of the aggressive and offensive actions carried out by the troops, several elements have been neutralised and large numbers of their equipment were captured including large quantities of their logistics consignments which were intercepted recently by our troops.

“Equally, the gallant troops courageously intercepted some Boko Haram criminals while attempting to collect ransom from the relations of the abducted victims leading to the decimation of the criminals and rescue of three women and two children.”

The defence spokesman explained that large weapons such as gun trucks, anti-aircraft, General Purpose Machines among others were also recovered from the terrorists.

While assuring the residents of its determination to flush out the remnants of the terrorists, the Army said six soldiers injured in action and have been evacuated for treatment.

In a relative development, the “Air Task Force of Operation Lafiya Dole has knocked out an Islamic State of West Africa Province (ISWAP) logistics base and neutralized several of their fighters in airstrikes conducted at Tumbun Rego on the fringes of Lake Chad in Borno State.”

The Coordinator Defence Media Operations, Major General John Enenche, who confirmed this in a statement said: “the mission was executed on 22 November 2020 on the heels of credible intelligence reports indicating that the location, with its makeshift structures camouflaged under dense vegetation, was being used by the terrorists as a hub for logistics items conveyed via the lake and its tributaries for onward transportation using trucks/ motorcycles.”

Reacting to the operation, the Military High Command commended the Air Task Force for their professionalism, urging “them to remain resolute in the conduct of operations in order to rid the Country of all terrorists’ elements.”