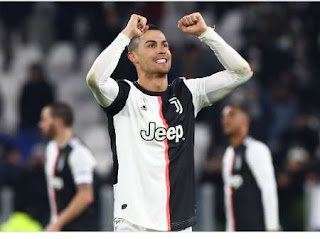 It is generally said that the older the Italian wine, the tastier it becomes.
Without mincing words, we can conveniently refer to Christiano Ronaldo as an "Italian wine"
Ronaldo scored a brace against Parma yesterday night, taking his tally to 16 in 20 Serie A matches this season.
The last Juventus player to have achieved that was Omar Sivori in 1960.
He has netted over 430 league goals, making him the only player to have done that across Europe top 5 leagues; English, Spanish, Italian, German and French league.
Ronaldo has played in 3 of the Europe top 5 leagues; English league, Spanish league and currently in Italian League.
He scored 84 league goals with Manchester United, 311 goals with Real Madrid and 37 and still counting with Juventus!
He started his senior career in Sporting Lisbon in Portugal, before joining Manchester United in England.
He left Manchester United for Real Madrid in Spain where he won 4 champions league.
Ronaldo has won 29 trophies in his career, this include 6 league titles, 5 UEFA Champions Leagues, 1 UEFA European Championship, and 1 UEFA Nations League with his Country Portugal.
He has won 5 Ballons, 4 European Golden Shoes.
It will interest you to know that CR7 (As he is referred to) has scored 128 champions league goals and this no of goals makes him the highest in the history of Champions league
CR7 will be 35years in less than 3weeks time, yet, he keeps on setting a record week in week out!
When will CR7 retire from football?
At 40?