Australian Muslims prayed for rain today, Allah accept their dua's and Now its raining in Australia 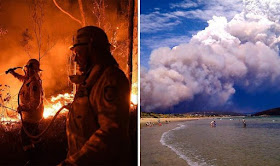 A  group of about 50-60 including children and women also offer Salah in Australia's Bonython Park in Adelaide, you all must have gone through this news already, Christian head Priest Patrick Mclnerney, who is from the center for Christian and Muslim relations also joined the Muslim worshippers at the park and he said, we joined our Muslim brothers and sisters for praying to God, to shower his mercy in the form of rain on Australia.

a picture of Muslims worshipping altogether with Christian has spread all over the social media, and you know what is amazing? Report says that Now it is raining in Australia, which ultimately cools down the bush fires and give relief to all those animals and humans who are suffering from those heavy deadly serious fire, many humans reported that they are unable to breathe because the condition of the atmosphere is filled with pollution which emerged by the fire.

Many people who are asthmatic leave Australia because the air is toxic and polluted, many are in hospital suffering from severe asthmatic attacks and lungs and breathing problems.

Now, our belief on Allah has become stronger then it was before, Indeed, Allah listens to all the prayers if his believer prayed with pure heart and sincerity.

We are glad and very happy to share with you all this news, and we ask you to pray for the Muslim ummah all over the world, as you all know Muslims in Asian countries are suffering from their life and death, and also for pray Muslims of the middle east.